Jonathan Atkinson has been selling WordPress themes on Themeforest for the past five years. Through hard work and customer support, he’s learned how to make a living on Themeforest without having to pack hundreds of options into his products.

Over the past year, Atkinson and his team at Cr3ativ.com have made an effort to convert all of their theme functionality into free plugins, eschewing the theme bloat that prevails in this market. Cr3ativ now has a plugins page where you can find functionality that enables carousels, careers, portfolios, shortcodes, and staff profiles. They plan to add events, discography and photostreams in the coming weeks.

The Benefits of Keeping Plugin and Theme Functionality Separate

Atkinson said they initially created the plugins to be used with their themes and to better serve their buyers. “I took the decision to make them as generic as possible to ensure they could be just as easily used within any theme – free or premium,” he said. “I also decided to offer them 100% free and full GPL 2.0 so people can hopefully use, learn and extend if they wish.”

Atkinson and his team are building new themes that support the use of their plugins and are also retrofitting the old themes to make use of them. The process hasn’t been easy, but they found help along the way.

“We have never created a single plugin before embarking on these and had to lean on Pippin from PippinsPlugins.com for advice as we moved forward,” Atkinson said. Branching out into plugins was completely new territory but Pippin Williamson helped to review and test their free plugins. “We had some things to change and at the end of development we’re happy we traveled this road.”

Overall, keeping plugins and themes separate has provided a better experience for Atkinson’s user base and gives his team more freedom in what they create. If this practice is so beneficial to theme authors, then why aren’t we seeing a mad rush of others moving to do the same?

The root of the problem is that consumers actually want themes that are packed full of options and functionality. The vast majority of Themeforest customers buy WordPress themes based on the demo. As WordPress has grown to power more than 21% of the web, theme developers are catering to people who, through no fault of their own, buy themes based solely on visual queues, not the code.

Atkinson explains how the theme market has changed over time:

At the very beginning when Themeforest started I think that the buyers were different. The majority of buyers were developers. They may not have been full-on developers but they certainly knew how to roll their sleeves up and do a little bit of CSS. But now we’ve switched over to where the majority of buyers are actually the website owners…They know how to upload a theme; they know how to install every plugin on earth and that’s about it.

Consumers want themes that don’t require installing a bunch of plugins. They want to be able to simply click to customize everything. As a result, bloated WordPress themes sell far better than those that follow best practices. Most of the top-selling WordPress themes on Themeforest are products that are packed full of multiple sliders, dozens of homepage options, shortcodes, unlimited layouts, page builders, etc.

Smashing Magazine has recently been promoting a WordPress theme that claims to be “the last WordPress theme you’ll ever have to buy.” The X theme, created based on advice from internet marketers and SEO experts, promises “truly unlimited styling.” It is one among many themes that have been built to be all things for all projects. 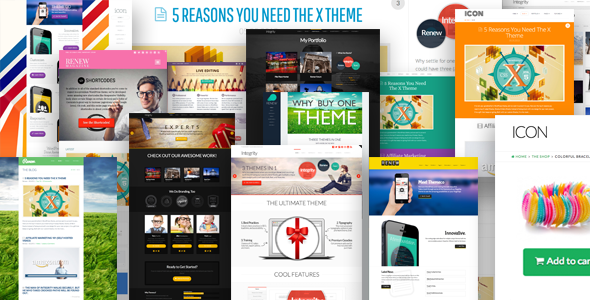 The WordPress theme market is saturated with themes that promise to do it all and these products tend to sell very well among non-developers. Specificity of form and purpose has been replaced with generic skeletons boasting unlimited options.

Theme authors are then faced with a grave decision: Sell a couple hundred niche themes with clean code or build every possible option/functionality into your theme and sell 50,000 copies. For those who are trying to make a living, it’s difficult to compete. This is a complex problem that doesn’t have an easy solution.

Atkinson and his team at Cr3ativ.com are among a handful of theme authors who are taking a principled stand against building plugin functionality into WordPress themes. Those who have chosen this path stand out as beacons in a vast sea of bloated products.

Tadlock’s Theme Hybrid framework comes with a suite of free plugins that offer additional functionality. On occasion, he has made wrong choices and had to retrace his steps:

There are things that I’ve put into themes and later realized that it was not the right choice. I just go about correcting those mistakes one at a time. Sometimes, it takes a number of months and possibly years of making sure you’re not breaking things for users.

The trend of packing everything into themes was ignited by WordPress’ increasing popularity and the fierce competition among marketplace theme developers to provide the the most value. Unfortunately, consumers don’t care about best practices and re-educating them is not an easy task. It falls to WordPress theme developers and marketplace regulators to make the tough choice to keep themes clean and preserve data portability.

If you’re a theme developer who is looking to remove functionality from your products and offer it in the form of accompanying plugins, you’ve got your work cut out for you. Tadlock’s advice: “Just do it. Make sure you offer your users a fairly easy transition, at least as easy as these types of transitions can be.”

Theme authors don’t necessarily need to suddenly add plugin development to their skills. Tadlock suggests that making use of existing plugins is a good option.

So many developers want to build everything in house when there’s a much better solution out there already. I’m even guilty of this at times. Of course, the infrastructure is not there on WordPress.org to make it easy for developers to work together. That’s why so many of us have turned to GitHub.

Tadlock reports that he’s seen a considerable jump in other developers using his plugins in their projects after moving his code to Github. Making use of others’ work and collaborating on improvements is less daunting than having to develop all the accompanying plugins yourself.

Since consumers inspecting commercial themes do not have access to the code, it’s not easy to know if a product is built with best practices in mind. The demo and list of features are often the deciding factors, especially for those who have no technical knowledge of WordPress themes. If you don’t want to have your data locked into a theme, you need to be on guard to select products that utilize plugins that will preserve your data.

When it comes to theme options, the cold, hard truth is that not everyone is a designer. There is no ultimate visual layout builder or unlimited color chooser that will magically make you into a designer. If this is something you can recognize about yourself, then you may want to steer away from themes that offer massive options panels with unlimited everything. Instead, opt for design-specific themes that follow best practices and offer a few options using WordPress’ native customizer.

Eventually, marketplaces may enforce more strict submission guidelines for their themes, based on community input. Theme developers who have sunk into a hole with their heavy, bloated products, will have to dig their way out or get pushed out. WordPress developers who want to be successful long-term will need to return to WordPress’ original design and keep plugin functionality separate from themes.