The results from Sacha Greif’s “State of JavaScript” survey were published today. Greif, who is co-author of Discover Meteor and the creator of Telescope, began his journey in modern JavaScript development a year ago with a beginner’s course in React but was overwhelmed with the many options for extending his knowledge into other frameworks. He launched the 89-question State of JavaScript survey to get a better picture of ecosystem and was surprised to receive more than 9,300 responses.

Instead of analyzing all the results himself, Greif enlisted the help of experts for each topic to give the results a more informed, well-rounded presentation. The survey covers front-end, full-stack, mobile and testing frameworks, build tools, developer profiles, and much more.

React won out in terms of developer satisfaction for front-end frameworks at 92%, closely followed by Vue.js (89%). Redux is the most popular tool for state management by a wide margin. 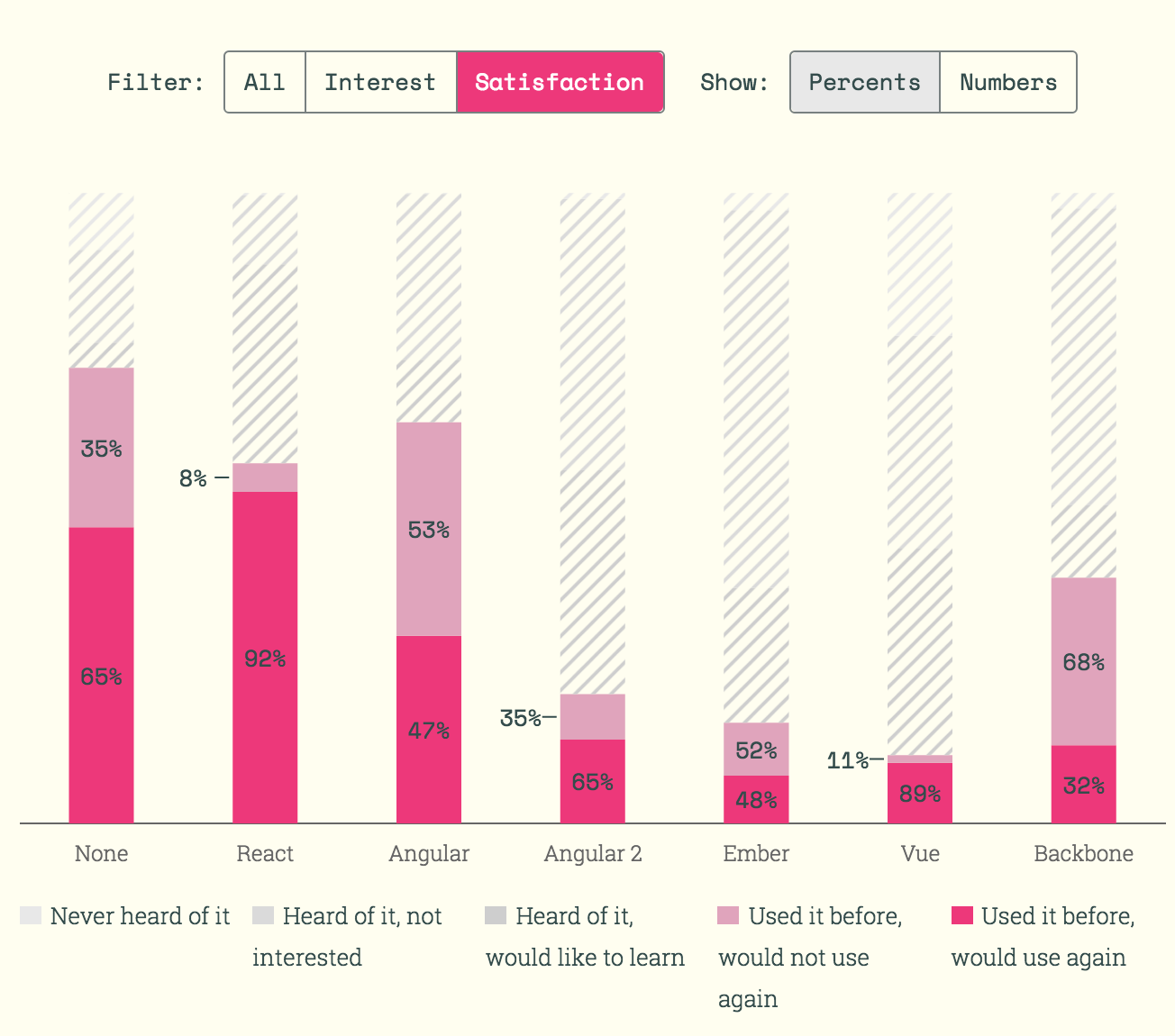 In breaking down API layers, REST APIs dominate the landscape with 79% of developers who have used them before being willing to use them again. Firebase comes in much further behind at 18%, followed by GraphQL at 5%.

Greif’s questions regarding build tools show that Webpack and Gulp are used roughly twice as much as Grunt and Browserify. Grunt, however, has a high dissatisfaction rate with 42% of those who have used it before indicating they would not use it again.

The State of JavaScript survey results are packed full of insights for those who are currently working in the industry or looking to begin their JavaScript education. Conclusions from the opinions section of the results are not surprising: a majority of developers think building JavaScript apps is overly complex right now and the ecosystem is changing too fast.

“If one thing has become clear to me, it’s that the growing pains that JavaScript is going through right now are only the beginning,” Greif said. “While React has barely emerged as the victor of the Front-End Wars of 2015, some developers are already decrying React for not being functional enough, and embracing Elm or ClojureScript instead.”

As the WordPress development community moves towards incorporating more JavaScript and API-driven interfaces into projects, React has so far been the framework of choice. It powers some of the most visible applications and plugin interfaces, including Calypso (WordPress.com’s publishing interface) and the Jetpack admin.

Greif plans on offering the survey again next year, which may reveal major changes in the most used technologies, given how fast the JavaScript ecosystem is changing. Sign up to be notified when he opens it again in 2017.