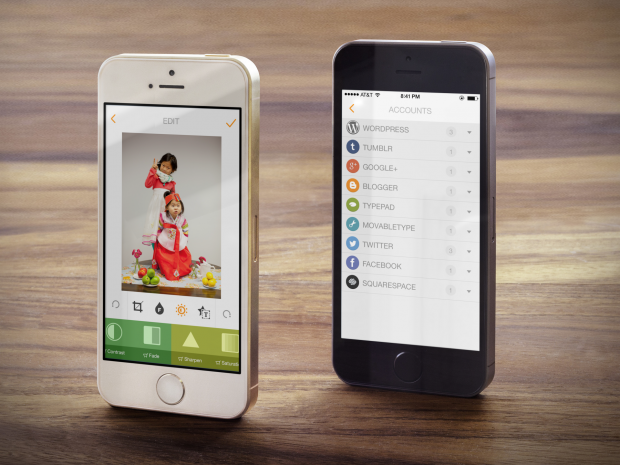 PressGram, the WordPress-powered photo sharing app, has significantly evolved since its launch. The app broke onto the scene last year, positioned as a game-changing challenger to the increasingly unpopular policies of Facebook and Instagram.

After supporting the native social networking aspect for several months, John Saddington, the app’s creator, found that most users were not looking to get signed up to yet another social network. The costs of supporting that aspect of the app were also skyrocketing. Saddington knew he needed to make some tough decisions.

Version 2.0, released last week, is a major update that completely removes the social layer, which Saddington had been working to pare from the app since the beginning of this year. He felt that it was time to bring Pressgram around to its original purpose. “[pullquote]The heart of my intent was always about digital publishing[/pullquote],” Saddington said. “This version is much more aligned with that original intent and vision.”

Cutting a major feature from a popular app is bound to bring some disappointment to users, but it is part of the natural process of discovering which features can be best supported and maintained long term. No app is born perfect in its first iteration, and Saddington decided that keeping “publishing first” was the best way to strengthen the app from both a technical and cost perspective.

Though Pressgram first began as a WordPress-powered app, it has evolved to become a more open system, designed to support all kinds of publishing platforms. “I figured that if we were going to start encouraging more people to tell their visual stories then it was worth spending the time inviting all types of visual storytellers to the table!” Saddington said. Pressgram 2.0 expands the app’s publishing capabilities to include more platforms:

Pressgram was fairly groundbreaking in the WordPress app space when it launched. However, many in the WordPress community were disgruntled that the app wasn’t open source, as it was based on OS software and could potentially serve to move the WP app space forward.

The last time we spoke with Saddington, he was open to considering an open source license for the app down the road. At this point in time, however, it seems that Pressgram will continue under a proprietary license.

There will always be those that feel strongly about “open source ALL THE THINGS” and I’m not sure I will ever satisfy those folks with any answer at this point in time – there are already some amazing OS alternatives to Pressgram that will suit their needs, for sure!

Saddington cut his teeth with proprietary software working with Macromedia Flash in the 90’s and has worked with a number of proprietary languages over the course of his career. He naturally floats back and forth between open and closed source software and appreciates the pros and cons of working with both. In the end, it comes to down to pure pragmatism for him in tackling his projects:

That being said, people will always be people and I’ve come to realize that I’m much more interested in working with pragmatists first and politicians second; in other words, I really enjoy building great stuff that helps people and far less interested in spending time debating the merits of this development philosophy over that one. I’m not a political person to being with so that always helps.

Saddington will continue to polish Pressgram’s publishing features and focus on making the app better in the long term. At this time, he doesn’t have plans to expand the app’s audience to Android, although he’s open to the idea. “I simply don’t have time at this very moment to give it much thought or development time (or project manage a team that could help),” he said.

I can’t help but wonder whether or not someone would have already built an Android app if the original app were open source. Ultimately, licensing is a personal decision for an engineer, which comes down to philosophy, workflow and communities. Saddington said that it has been refreshing and healthy for him to engage in other online cultures and connect with other developer communities.

He’s currently working on a new desktop publishing client called Desk PM, which will support Markdown. The app enables you to publish to various platforms from a desktop app with only the bare necessities. Desk PM makes use of the Obj-C code from Pressgram, given that they share all the same integration points with publishing tools. Saddington will continue to support Pressgram and will draw on that experience to roll out a new desktop app for publishing to multiple platforms.

2 responses to “Pressgram 2.0 Removes Social Layer to Focus on Publishing”