Today Jetpack announced that its users now have access to a collection of 165 free themes from WordPress.com. Jetpack users can browse, preview, and activate themes by visiting the WordPress.com Theme Showcase. WordPress.com has also added the ability for Jetpack users to upload a theme from its interface as well, a feature that targets those who are heavily using Jetpack Manage instead of the WordPress admin. 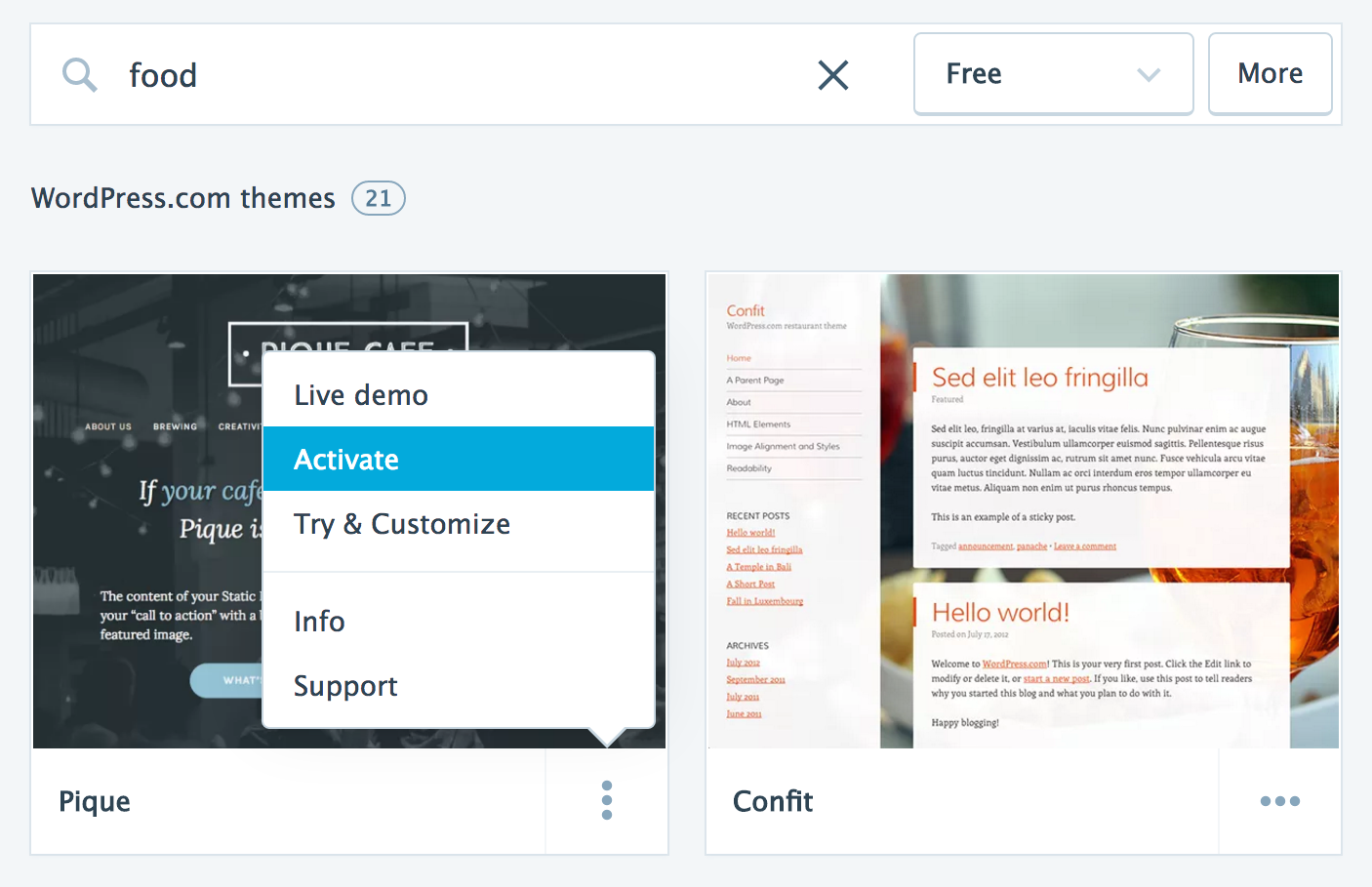 Many of the free themes are already available from Automattic’s account on the WordPress.org Themes Directory, but the limitations of the preview functionality doesn’t present themes in their best light. The Theme Review Team added a new rule last year that theme authors can only upload one theme at a time and will have to wait for it to pass through the queue before submitting another. This severely restricts individuals and companies that are prolific theme authors, requiring them to wait months in the queue. Authors can realistically expect to only publish one or two themes per year on WordPress.org.

After Zerif Lite, one of the most popular themes on WordPress.org, was suspended for five months for violations of content portability requirements, Matt Mullenweg was one of the most vocal opponents of what he called “draconian requirements.” In 2015, Mullenweg went so far to say that he is “completely okay with having something in the directory that breaks every guideline, as long as it’s interesting.”

The Theme Review Team has not made significant changes that would give authors more freedom. Instead, much of the Team’s time seems to be spent looking for ways to reduce the queue. It’s no wonder that a company like Automattic, with the infrastructure of Jetpack Manage and WordPress.com, would choose to distribute themes via a more efficient route. However, this move has left some WordPress.org theme authors wondering if WordPress.org improvements will be less of a priority in the future.

Can you blame him? No. They (he?) needs to wrangle in the experience, avoid fragmentation, compete with other consumer hosted platforms.

But what does it all mean for us surviving off of the .org distribution? Tough cookies, that's what.

“Today’s announcement is the glue that holds together Matt’s vision for the future .org experience, delivered via Jetpack,” WordPress.org theme author Matt Medeiros said. “Solving the dark cloud above the repo seems a lot less critical when we can throw Jetpack in front of users as an alternative. It’s a calculated measure to control the on-boarding experience of new users, which WP desperately needs for continued growth amidst a field of competitors like Wix and Squarespace.”

According to Jetpack team member Richard Muscat, WordPress.com has “no immediate plans to sell themes at this time.” Jetpack users have access to free themes but will not, in the foreseeable future, be invited to purchase WordPress.com’s commercial themes. The team also plans to continue its presence on WordPress.org.

“We have no plans to stop releasing themes into the .org directory,” Muscat said. “We just believe this makes an even nicer, more integrated experience for accessing the themes we offer on the WordPress.com side of things.”

Jetpack’s announcement has also reignited fears of what the plugin’s commercialization might do to the WordPress ecosystem. In the past, Mullenweg has identified both Jetpack and WooCommerce as “multi-billion dollar opportunities” that could each individually be larger than WordPress.com. If WordPress.org is failing to attract new users with its theme previews, then Jetpack/WordPress.com is likely to pull even more eyes away with its separate marketplace.

“As a small business (a label that’s critical) product creator, I see this as a motion in the direction to increase the visibility of Jetpack’s free/paid feature set, above the rest of us trying to desperately make a living out here,” Medeiros said. “Jetpack will be marketed as the one-stop-solution for all of your small business website needs, if that hasn’t already been woven into the fabric of it’s current messaging. It is ultimately positioning itself as the trusted source of functionality for new users, versus us ‘third-party’ plugins. After all, who wouldn’t trust the company ‘behind WordPress?'”

“What worries me more is the speed at which Automattic is pushing Jetpack,” Neagu said. “The Personal plan was introduced, and yesterday I got a cold email from some company they work with promoting their affiliate program. Today themes were introduced. It makes me wonder how far they plan to go and how this will affect theme and plugin developers.”

“As a theme author, I am not that worried about this particular aspect. Right now those themes are quite hard to find (it took me 10 minutes), are more targeted towards people using Jetpack Manage, and as far as I can see lots of them are looking a bit outdated.”

Neagu sees a disconnect between what WordPress.org thinks users want and what they are actually looking for. Based on his research and experience selling themes, Neagu has found that users still expect complete solutions from themes. WordPress has grown beyond being just a blogging platform. Neagu said he hopes WordPress.org’s research for the new editor will reveal how many people are actually using the software for business.

“We run a themes directory as well and we did extensive heatmaps to understand what kind of themes/screenshots users click on/ like,” Neagu said. “Looking at the results of a ‘business’ query, I am quite sure that users won’t be excited.” 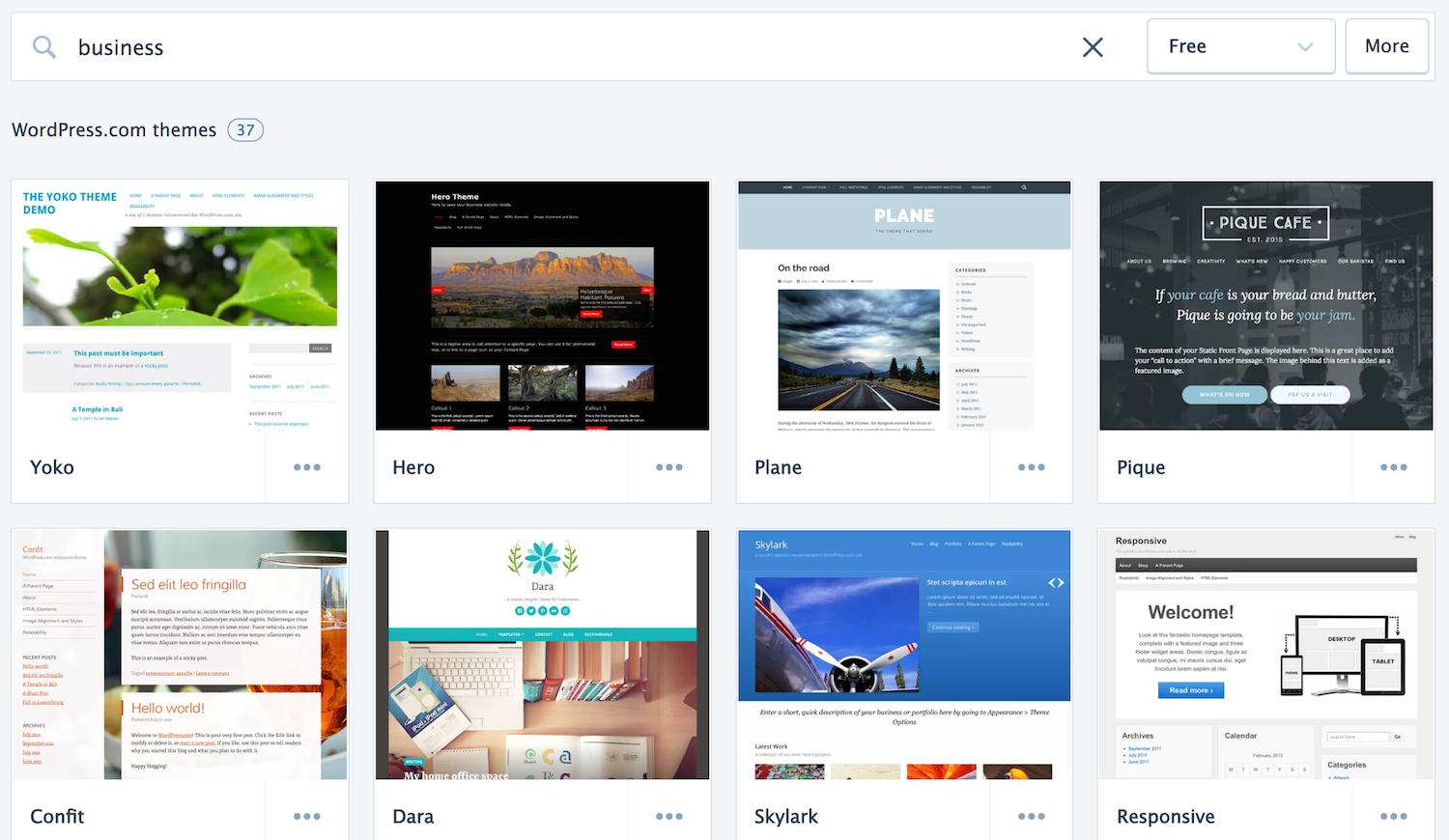 This is likely the first iteration, and data from more Jetpack users should help WordPress.com refine the queries to present a mix of newer and popular themes. At the moment it looks to be simply a way to offer all of their available themes without the red tape of WordPress.org.

The news of WordPress.com installing and updating themes for Jetpack users gave rise to speculation about whether or not this move is a violation of the plugin directory guidelines. Discussions centered around guideline #8, which states that plugins may not send executable code via third-party systems:

Serving updates or otherwise installing plugins, themes, or add-ons from servers other than WordPress.org’s.

Jetpack representative Richard Muscat gave us the following statement on behalf of Automattic:

The guidelines prohibit _plugins_ from installing third party code directly but Jetpack doesn’t do that for this feature. The guidelines state that: “Executing outside code within a plugin *when not acting as a service* is not allowed.”

The service Jetpack provides with respect to themes is via WordPress.com which _is_ acting as a service. This is identical to how Akismet operates with respect to spam-filtering and other Jetpack services such as data sync and backup, content delivery (Photon), and plugin installation/updates.

We ask users to opt-in to WordPress.com services when connecting Jetpack and all our services follow established guidelines.

The public discussions also prompted WordPress.org Plugin Directory representatives to post an article clarifying that Jetpack is not in violation for installing themes.

“The trick here, and this is what is about to sound like hair splitting, is that it’s not the plugin UI on your site that does the install,” Mika Epstein said. “In order for Manage WP and Jetpack to work, you have to go to your panel on their sites and install the items.”

As SaaS products have not yet been used extensively in the WordPress ecosystem, developers are still figuring out how this type of implementation can interact with WordPress sites via plugins installed from the official directory. The plugin team clarified that if you are pushing plugin or theme installs or updates from a third-party service on its website, then it is no longer a third-party service but rather a first-party service where you are directly initiating those actions.

However, not all developers agree that this distinction makes any difference.

Gravity Forms founder Carl Hancock contends that ManageWP is different in that it doesn’t provide users with themes and plugins – it’s just a service for managing your sites.

“They [ManageWP] do not provide an alternative repository of themes and/or plugins that competes with the WordPress.org repos.”

This is where much of the controversy lies for WordPress.org theme authors who depend on the official directory for distribution. Competing with equally free themes that are hosted on WordPress.com with a much better sorting UI and preview functionality is a new challenge they will have to embrace.