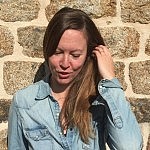 This post was contributed by guest author Jenny Beaumont. Jenny Beaumont is co-organizer of WordCamp Paris & WordCamp Europe, a frequent speaker at WordCamps in France and abroad, and a contributor to a number of blogs. After 17 years building things in and around the web, she is taking a year-long sabbatical to get a new outlook on life.

If you’ve organized a WordCamp or similar event, then you know the work involved in managing a call for papers. With every submission comes lots of information, both about the candidate and the proposed talk. And with some candidates submitting multiple proposals, the total number of submissions can be 3-4 times the number of slots available.

The call for speakers for WordCamp Paris 2016 brought in upwards of 70 candidates and over 100 proposals!

In the past, most WordCamps have taken proposals through online forms and then organized them within spreadsheets for deliberation. But just as WordCamp Paris has grown in recent years, so has the organizing team, and the spreadsheet method became increasingly laborious and inefficient.

There’s a plugin for that

While preparing for WordCamp Paris 2015, the organizers decided to tackle this problem, and turned to WP Idea Stream, a plugin developed by Mathieu Viet (who has since joined the organizing team).

As the name suggests, WP Idea Stream is a collaborative tool built for the purpose of sharing and managing ideas between members of a WordPress site. A close look shows us that this simple concept contains a lot of intricate and useful features.

WP Idea Stream solves this problem by giving talk candidates a simple one-time sign-up. With their own account they can:

Some team members wait until closing to sit and evaluate the proposals in one go, while others prefer to react over time as talks roll in. How do you keep track of those you’ve seen? How do you exchange thoughts and opinions with your teammates? How do you navigate through all of this information?

WP Idea Stream uses a five-star rating system to vote on ideas (or talks in our case). This makes it easy to see which are the most popular among a large group of organizers.

The plugin settings page includes an easy way to customize the wording for each level.

To compliment this voting system, organizers can leave comments on each submission to further bolster their argument for or against a talk. They also have the opportunity to point out information that might be lacking, ask questions of the candidate, or make notes of recurring themes that emerge.

As an administrator, there are two ways to view talk proposals: the main “post” view, and a view from within your own profile.

The “post” view is much like the default blog home page on a standard WordPress site. Submissions are listed in chronological descending order by default, including pagination and a display of the total number of talks to date. Then, there is the possibility to:

The excerpt for each talk submission includes: 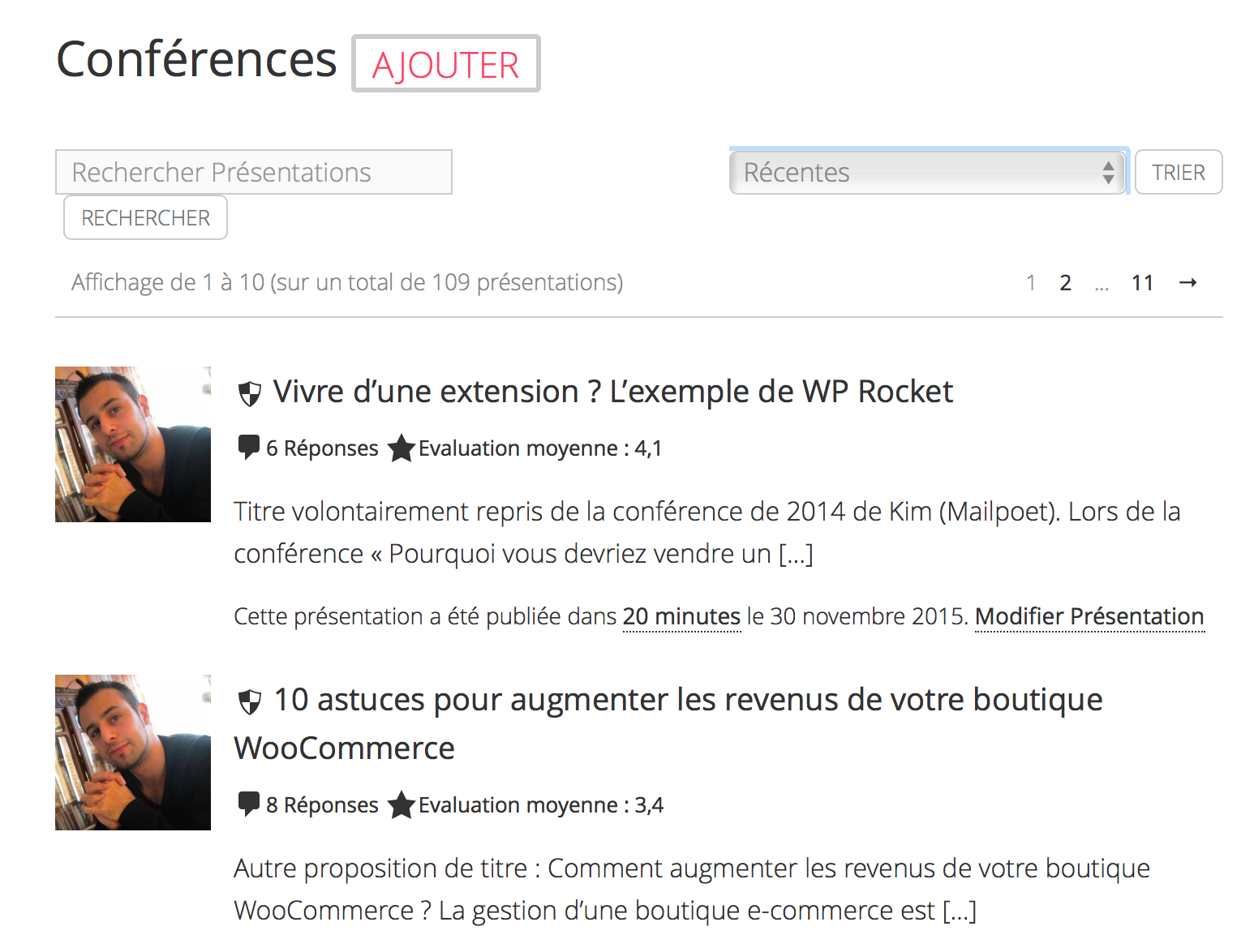 The “profile” view is intended for subscribed users to view their own submissions and to manage their personal information. As an admin, this front-end view also includes some very useful tabs to help keep track of your participation in the deliberation process. 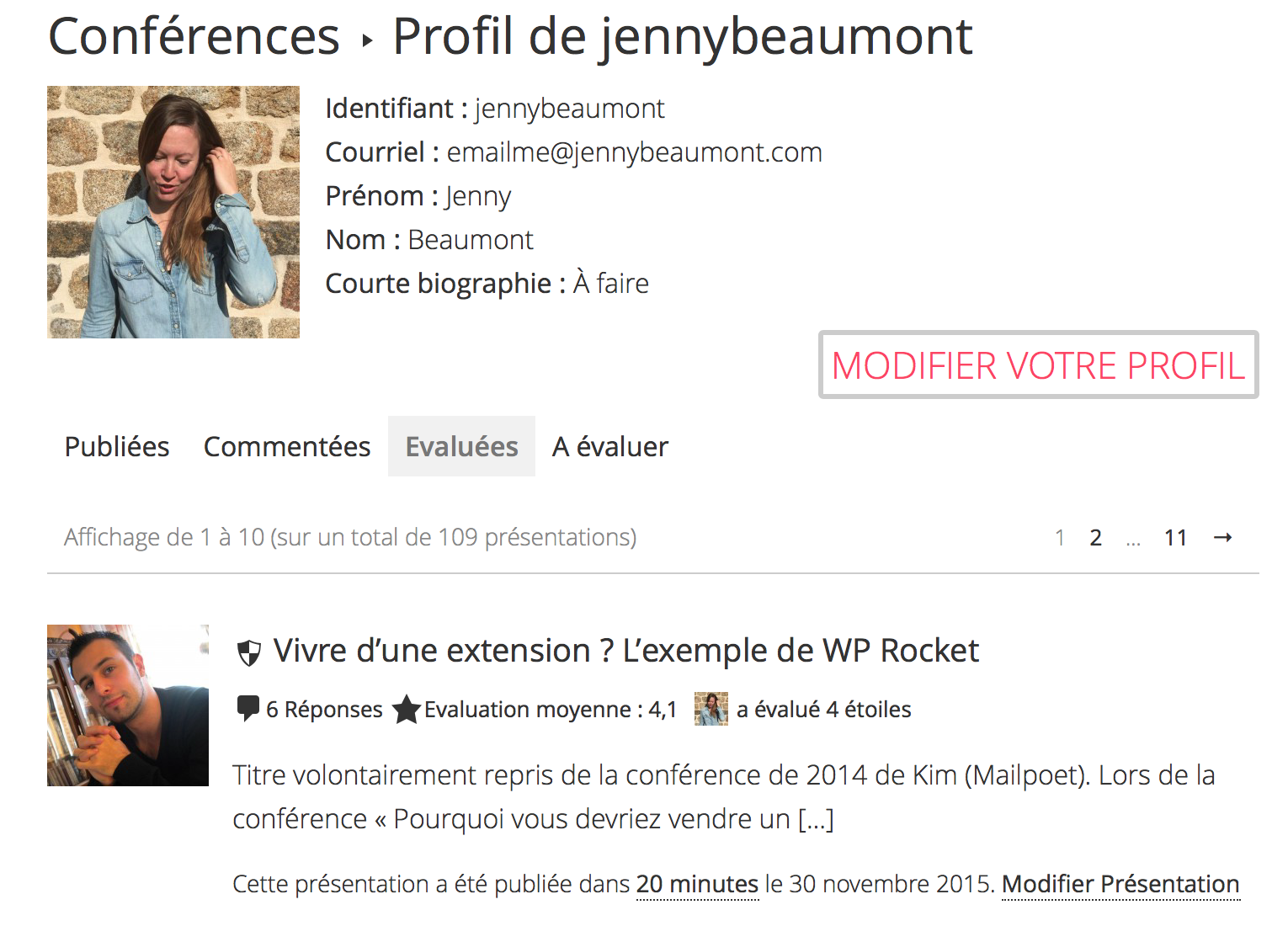 We use tags for what we call talk “zooms” (basically just thematic tags). The advantage here is that, just like standard WordPress tags, users can be prompted with “most used” keywords to describe their talk’s theme.

Categories and tags have quick links to filter the view by those terms.

This has proven extremely useful for spotting recurring subjects and trends, comparing similar proposals, and even for figuring out subjects that haven’t been covered that we might want to find speakers for.

When it comes down to it, you can’t get around the good old-fashioned spreadsheet for finalizing the job.

Once the team has finished rating all of the talks, the submissions can be easily exported to a spreadsheet, and sorted by vote, theme, and talk duration. From here, the program is built up and finalized, and the bulk of the work is already done.

Using WP Idea Stream does requires us to have and maintain a WordPress installation separate from our official WordCamp site, but this is also proving to have a number of advantages including:

WP Idea Stream doesn’t work like this out-of-the-box. Many of these features were built specifically for our purposes. Because the plugin is developed to be highly extensible, adapting it for your own needs is relatively easy.

WP Idea Stream is built with a templating system, allowing you to easily override any of the front-end views from your own theme. 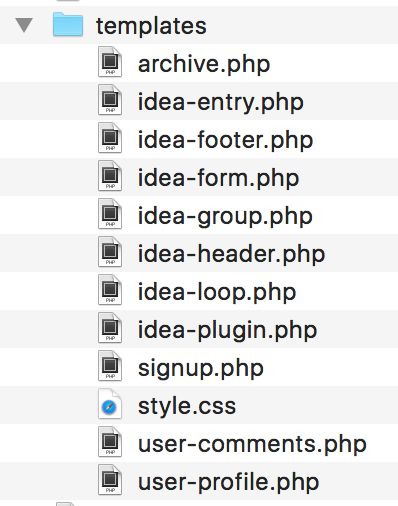 Placing a file named wp-idea-stream-custom.php in wp-content/plugins/ extends the plugin, allowing you to build on the default functionality.

Here are some of the features we’ve added to adapt the plugin to our needs:

We also added a fun little function in case any candidates try to sneak a peek by hacking the site’s comment RSS feed:

We have used this system for two consecutive years now, improving the functionality as we learn what features are needed to make the process as smooth and efficient as possible. Overall, we might actually spend more time on the process, but it’s qualitative time. These tools humanize the process, allowing us to easily navigate the information and further invest ourselves in both the candidates and their ideas.

As a collaborative tool, it adds an element of fun that you can’t get out of a spreadsheet! This brings an added dynamic to the group, allowing us all to participate in the process and have a voice (except for those organizers who propose talks, of course! ;) ).

Like the idea? You should give it a try!