It’s been seven months since Grant and Clay Griffiths, founders of Headway Themes, apologized to customers for failing to communicate on a regular basis and provide adequate customer support. In the apology, the founders admit that the company was experiencing financial difficulties and noted that competition in the WordPress drag-and-drop page-builder space was tough. The duo vowed to communicate more, provide better customer support, and continue to develop Headway 4.0. Has anything changed since the apology was published?

In December of 2016, Flywheel hosting acquired Pressmatic, created by Clay Griffiths. Soon after, Headway Themes migrated to Flywheel hosting which caused a few hiccups such as site downtime due to DNS propagation, login issues, and an issue with the Headway Dashboard. The acquisition raised questions on how it would affect Clay’s ability to work on Headway.

“This acquisition and employment will provide myself and my family much more stability than we’ve had in a long time, and will allow me to better focus on Headway in my spare time,” Griffiths said. “This includes rolling out the upcoming 4.1 release, and working hard to make sure the support and other outstanding issues are resolved for all our customers.”

Soon after the apology, Headway Themes began to use Influx to provide first-tier customer support. Influx provides customer support for companies, including those in the WordPress ecosystem such as Advanced Custom Fields. Any issues that Influx couldn’t solve are escalated to Clay and Grant. In February, Gary Bairéad, a former Headway Themes employee, contacted Headway Themes support about the status of Headway 4.0 and received the following response. 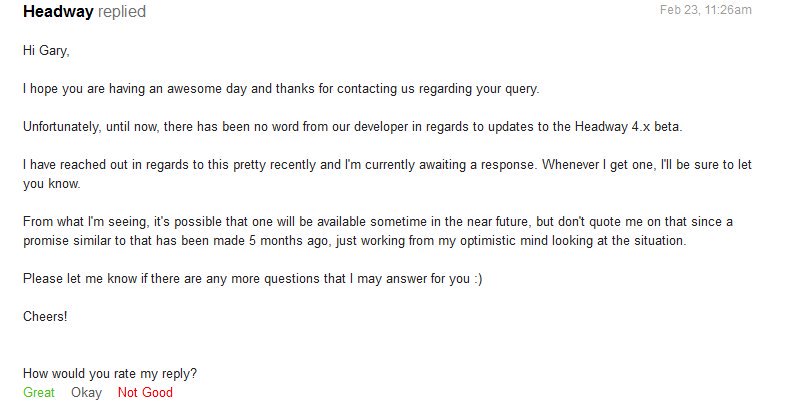 Influx couldn’t answer the question because Headway developers had not informed them of its progress despite inquiring about it. Influx notes that there may be a beta released in the near future but not to be quoted on it because a similar promise was made five months prior. In January, the official Headway Themes Twitter account confirmed that Headway was being supported and that 4.0 would be released soon.

Around the same time period, another Headway Themes customer submitted a support request asking about the status of a longstanding issue they were having. Influx explained that there was a lull because the main developers were failing to communicate. The support representative also pointed out that it seemed the only way for customers to get information about Headway Themes was by emailing support.

Influx says it tried multiple times to contact Headway Themes developers about the issue and said it was lobbying hard to get it rectified.

In February, Bairéad published a request to third-party block customers to not renew through Headway Themes.com and to instead, purchase and renew directly from the developer’s sites. Chris Howard, founder of Pizazz WP, and Chris Rault, co-founder of HeadwayRocket, confirmed they are owed money from customers who purchased and renewed blocks through Headway Themes.com.

I reached out to both developers to see if they’ve been paid since February.

“I’ve sent Clay a bunch of messages, but he’s completely ignoring me and hasn’t paid over another cent since the last long delay,” Rault said.

“It’s down to only 2 or 3 renewals a month, but I’m not receiving anything still. I’d estimate they still owe me around $2,000,” Howard said.

For Howard, the issue of not receiving payments has been going on for months.

Headway Themes’ apology does not mention the former support team who the company failed to pay on time for months. Since the apology, members of the team have received small payments but are still owed thousands of dollars. Receiving payments from Headway Themes is often a difficult process.

After not receiving a payment in February, a former team member sent a flurry of emails to Grant and Clay Griffiths inquiring about the payment. Clay eventually responded that they would send out payments when they’re able too. After a week of questioning when that would be with no response, the team member received a payment.

A Headway Themes customer recently contacted support to ask about the status of Headway and published Influx’s response to the company’s support forums. Here’s their response:

Thanks for reaching out.

Currently, Headway is going through a restructuring phase to resolve the challenges being faced at this time. We do not have the full details here at support but the main stakeholders are working to return Headway to its rightful mode of operations.

Please let me know if there are any more questions that I can answer for you. Kind Regards.

To learn more about the restructuring process and what’s going on with Headway development, I reached out to Grant and Clay Griffiths. Both have not responded to my request for comment.

Blox Picks Up Where Headway Left Off

Last year, when it appeared the future of Headway Themes was in jeopardy, Maarten Schraven forked the Headway 3.8.8 codebase and named it Blox Builder. Blox Builder is 100% GPL Licensed and is a direct replacement for Headway. Schraven recently answered a number of questions related to the project, one of which is how easy is it to transfer from Headway to Blox.

There are different ways to convert your Headway Theme to Blox Theme. The best way is to export your template, you get an .json file. In this file you have to change hw to bt and headway to blox. If you have a large website you also can change the database tables. Some of our users have Blox Theme and Headway Themes side by side and switch between them. The last way (not yet available) is our conversion script. This script can do two things, change the database or do the same search and replace. This script will work automatic or as standalone.

Or, if you think this is to difficult, you always can ask us for the conversion, we can discuss this on e-mail or skype

There’s no time frame on when the conversion script will be available. If you’re a fan of the way Headway Themes works and are looking for a similar replacement, check out Blox Builder.

Many in the Headway Themes Community Have Moved On

A number of devoted fans and customers of Headway have switched to other page builders like Divi, Elementor, and Beaver Builder. What was once a vibrant community-run Slack channel for Headway Themes enthusiasts has turned into a ghost town. There is little hope among them that the company will be able to rebound.

Not Much Has Changed

Unfortunately, the issues that prompted Headway Themes’ founders to issue an apology are still present. There is a lack of communication on the company’s blog, social media accounts, and to Influx, the company it has outsourced customer support to. The apology dated Sept 13, 2016, was the last post published to the company’s blog. Former employees and third-party developers are still owed considerable amounts of money and there has been little if any development on the Headway code base.