The Ghost open source blogging project had an interesting path to get to where it is today. John O’Nolan, the project’s creator, originally introduced the idea of his pure blogging platform as a “WordPress-lite fork.” After a great deal of deliberation, O’Nolan decided not to fork WordPress and instead opted to built his application on Node.js, powered by the Express framework.

The Ghost tagline “Just a Blogging Platform” is essentially a reaction to WordPress’ “Just another WordPress site,” and a departure from what O’Nolan perceived to be an increasingly CMS-focused WordPress core. After a successful round of funding on Kickstarter, with more than $100,000 raised in the first 48 hours, Ghost was able to break out on its own. The project tapped into the growing demand for simplicity in blogging software. Ghost fans don’t want it to do everything; they simply want to publish blogs.

There were some in the WordPress camp who were disappointed that the project would not be continuing on as a fork, as Ghost would have been an appealing “flavor” of WordPress for users who don’t need a CMS. A few WordPress plugin developers were excited about some of Ghost concepts and have produced plugins that bring those into WordPress. Gust is one in particular that caught my eye.

Arūnas Liuiza has been slowly adding Ghost-style functionality to the Gust plugin ever since he released it on WordPress.org in mid-December of 2013. His objective for the plugin is to bring a Ghost-inspired, clean admin panel into WordPress for users who want to focus on blogging.

The plugin adds markdown, a word count and live previews to the WordPress post editor. If the viewport is too small to display both panels, the live preview is then tabbed:

The new post tagging interface is one of the recent additions to the plugin. Its unobtrusive place at the bottom of the screen keeps the focus on content creation in the main part of the viewport. 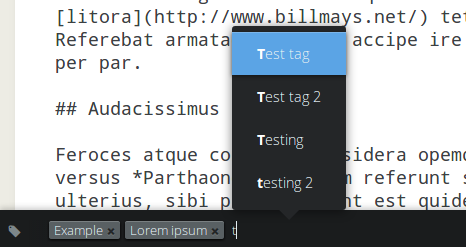 The post settings at the bottom of the editor allow you to easily edit the time published, post slug and delete, if necessary. 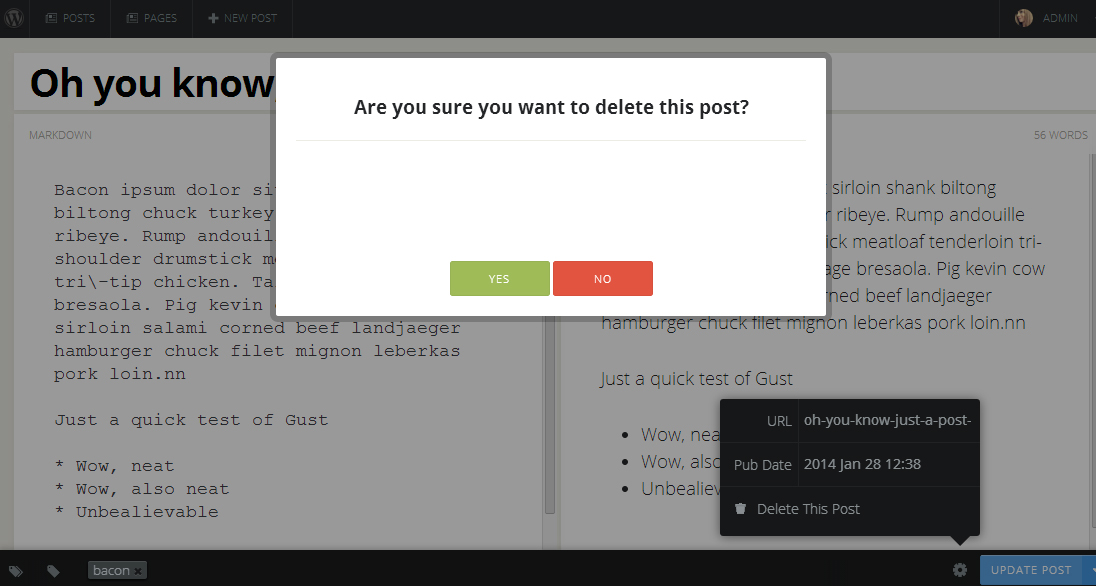 Gust is an unofficial port of Ghost features to WordPress, which is why it adopted the slightly modified name. Its capabilities currently include:

Gust requires PHP 5.3 or higher. After you install the plugin, it may seem like it’s not working. That’s because there’s not yet an intuitive way to take users to the Gust admin panel. You get there by visiting: yourdomain.com/gust. Adding a button to the admin area to launch the Gust editing panel would help to make the plugin easier to use. However, once inside the Gust panel, I found the current features easy to use and free from major bugs.

Liusiza plans to add a category manager in the upcoming 0.4 version of the plugin. He cautions that this is an early release, so some features, such as categories and support for featured images, are not yet present. If Gust is able to gain enough interest, he will add these features in a future release.

I would like to see Gust presented with a more unique design that isn’t a wholesale copy of the Ghost editor, but that’s a matter of preference, not function. Overall, I like what Arūnas Liuiza has done with Gust. If he continues to further develop and support it, the plugin will no doubt become a solid option for streamlining the WordPress admin for bloggers.