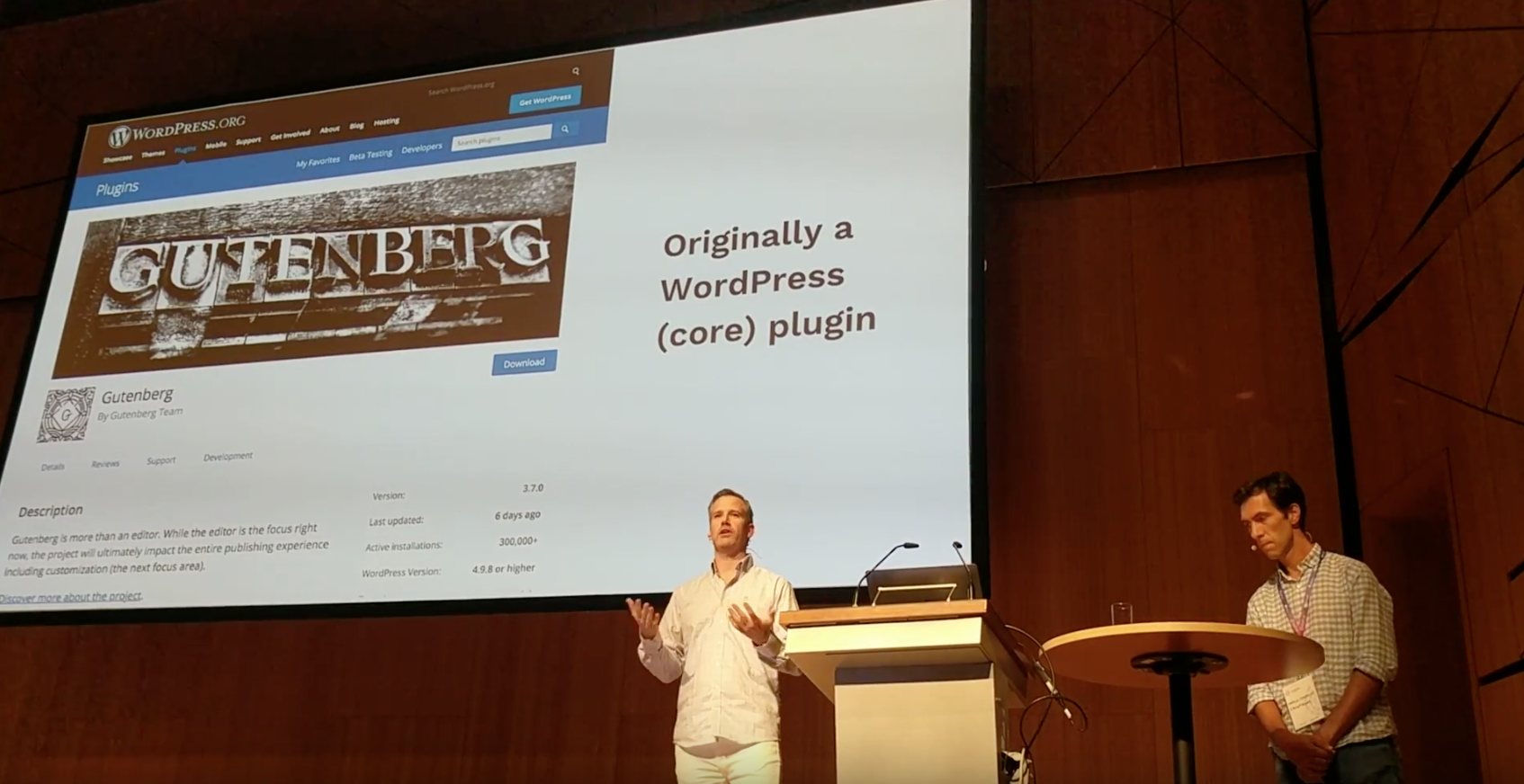 The Drupal Gutenberg project is gaining momentum after Per André Rønsen and Marco Fernandes gave a presentation at Drupal Europe this week titled “Introducing the Gutenberg content editor for Drupal 8.” Rønsen and Fernandes are representatives of Frontkom, a digital services agency based in Norway that has ported WordPress’ Gutenberg editor over to Drupal for use with client projects. They also created the Drupal Gutenberg project, which aims to bring this new publishing experience to Drupal core.

Building landing pages in #Drupal has never been easier. Coming soon to a Drupal site near you! #drupaleurope pic.twitter.com/LLpH91AY9n

The Frontkom team gave a live demo of the Gutenberg module added to the page content type and showed how a few of the core blocks work. They concluded the presentation by hailing Gutenberg as an exciting new tool that will bring companies new business, make happier clients, and inspire more code reuse and sharing among developers.

“The reception has been amazing,” Rønsen said. “A lot of different speakers have referred to Gutenberg both before and after the session. Bigger organizations and companies have expressed interest in implementation and contributing. I was told the session was one of the most well visited (after the keynotes) in the whole conference.”

Overall, the Drupal community gave the Gutenberg editor a positive reception. However, Rønsen said he received feedback from some who are concerned about how it stores data. He said the general consensus was that “the UI is awesome,” but that the Drupal Gutenberg project would need to make sure data is stored in way that is as structured and portable as possible.

“Some developers are skeptical about storing too much data unstructured like Gutenberg does,” Rønsen said. “This also means we might integrate Gutenberg closer to some key Drupal modules used for structured page building today. Gutenberg can serve as a UI for embedding existing structured content, and that is something we are looking into.”

Rønsen said the next steps are centered around getting a stable release that will handle the core Gutenberg blocks and the core D8 blocks in a way that is future proof. In order to do this, they are waiting for the project to be merged into WordPress core.

“We will delay a stable release until Gutenberg is in WP core,” Rønsen said. “Things are moving very fast still with Gutenberg – and that’s a good thing. As soon as we have a stable release, we will introduce tools we have built in top of Gutenberg for publishers. These will be available to WordPress, too.”

One of the most exciting aspects of the Frontkom team’s presentation was the idea of sharing a project across publishing platforms.

“It is key for us that Gutenberg stays decoupled from both CMSs as a library, and our hope is that Gutenberg core devs will catch onto the vision of Gutenberg as the ‘editor for the open web’ — not just for WordPress,” Rønsen said.

“Drupal core developers are however planning a React-based revamp of the Drupal admin UI, too. It will take at least two years to release it, and even then, I’m of the opinion that the content edit UI and page building features should be done last, and rather leave room for third party solutions like Gutenberg. This is an open question, but at least the key decisions makers for the new UI will consider how Gutenberg works and learn from it.”

Drupal decision makers are also taking interest in Gutenberg and seem open to considering it as viable option for improving the CMS’s editing experience.

“When the Drupal project owner was asked directly in a Q&A what he thought about solutions like Gutenberg coming into Drupal, he said he liked it, and that it’s a good thing for Drupal,” Rønsen said. “Dries is very open minded and not afraid of the concept of ‘Proudly built elsewhere.'”

Rønsen and Fernandes have published the slides for those who want to view them, although most of the session was devoted to the live demo. The official recording has not yet been posted but should be available shortly.

Update: The official recording has been published: