WooCommerce is the current leader in e-commerce software, capturing 31% of the market, thanks to its relatively user-friendly interface and connection to WordPress. However, setting up a WooCommerce site, or any e-commerce site for that matter, is not for the faint of heart, no matter how user-friendly the software. It requires knowledge of hosting, PCI compliance, payment gateways, SSL certificates, shipping methods, tax, and more.

When Automattic acquired WooCommerce last May, the company accepted the challenge to make it as easy to create stores online as WordPress.com has done for websites.

“I believe that the web needs an open, independent and easy-to-use commerce platform that you can run yourself on your own website,” Matt Mullenweg said in his video announcement of the acquisition.

Automattic has been working to simplify selling with WooCommerce and today the company announced WooCommerce Connect, the secret project that Mullenweg hinted at during WooConf.

WC Connect is WooCommerce’s new Automattic-hosted SaaS architecture that was created to offer store features in a more user-friendly way. It is built on the WP REST API and offers a simplified Calypso-style interface for configuring options.

The first service offered via the alpha version of WC Connect is real-time USPS shipping rates for US-based stores. It eliminates the need for a USPS API key as well as a subscription key from WooCommerce. One of the advantages for the user is that there are fewer software updates to install for extensions, as all the code is maintained on Automattic’s servers. 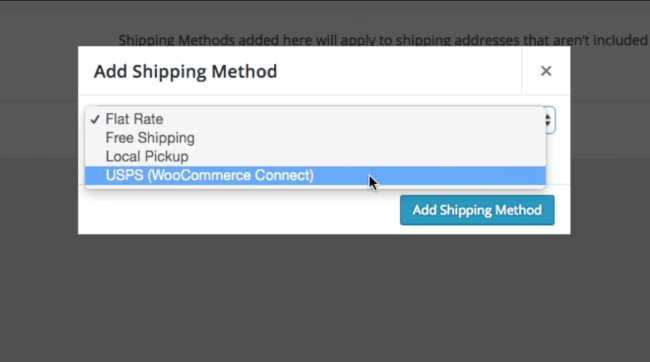 What’s Next for WooCommerce Connect?

If the testing goes well, WooCommerce plans to roll Connect into the plugin’s core to make it easier to serve more hosted e-commerce components. The team is also working on expanding shipping options for the beta.

“In the near future we hope to integrate with further shipping services, most likely Canada Post next,” said WooThemes co-founder Mark Forrester. “Shipping and payment options seem the logical place for us to start.”

Forrester confirmed that while the USPS shipping method is free, WooThemes is exploring monetizing other service offerings in the future. If WC Connect has a successful beta period, the team will consider using the same model for offering payment gateways in the future.

“Setting up payments for your store should be simple and behind the scenes,” Forrester said. “We believe we can offer better options for our customers working closely with payment partners and using connected services.”

Forrester said that the team hopes WC Connect can be baked into WooCommerce core soon, but they will make the decision based on user feedback from the alpha/beta period.

Those who create WooCommerce extensions and depend on its ecosystem may be wondering whether the SaaS model will overtake the plugin entirely. Last May, during his WooCommerce Q&A, Matt Mullenweg confirmed that Automattic is not moving towards a 100% SaaS model.

“If or when we do SAAS, the plugin isn’t going away, it’ll continue as it has,” Mullenweg said.

WooCommerce is not being rolled into Jetpack, as many suspected when Automattic acquired the product. However, WC Connect does require users to connect to WordPress.com via Jetpack.

“We feel it makes sense to leverage the code/infrastructure of one of the most powerful WordPress connected services,” Forrester said.

The team is aiming to make WC Connect a simpler way to connect services to online stores without users having to leave their WooCommerce dashboards. Many store owners would rather pay for hosted software they don’t have to update as opposed to self-hosted extensions that require regular maintenance.

If the strategy of offering hosted e-commmerce components succeeds at making store management easier for non-developers, Automattic will be able to profit from offering compelling commercial WC Connect services, such as payment gateways, and expand WooCommerce’s global reach.