Anders Norén, one of the most well-respected theme authors in the community and an early adopter of Gutenberg, will be leading the design of the upcoming Twenty Twenty default theme. He is working alongside team Theme Wrangler Ian Belanger, a developer who is currently sponsored by Bluehost as a core contributor. Carolina Nymark is also collaborating as a rep from the Theme Review team.

Reactions to the news were overwhelmingly positive. I have never seen the WordPress community more excited about a default theme. Those who have followed Norén’s work for a long time are hopeful that Twenty Twenty will be a theme they can actually use to build websites.

Will WordPress Repurpose the Chaplin Theme for Twenty Twenty or Start from Scratch?

Norén has released 20 free themes on WordPress.org with 2.85 million downloads and a cumulative rating of 4.98 out of 5 stars. Chaplin, his most recent release, is a beautiful example of the possibilities that the block editor opens up for users who want to design their own sites without having to search through dozens of panels of Customizer options. It provides the bones for an agency or business style theme but the block editor enables users to create advanced page layouts that would suit many different types of websites. 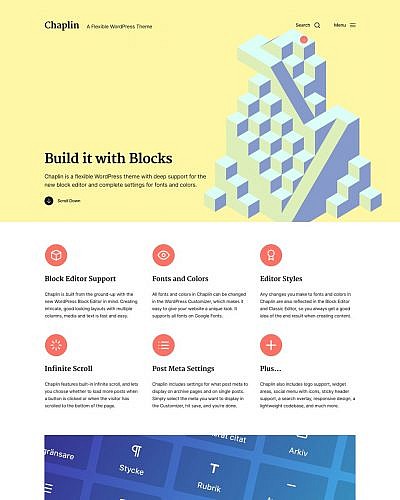 Chaplin would make a good candidate for WordPress’ next default theme, since it showcases the block editor as the main vehicle for editing the home page layout. Users can easily create unique customizations with different combinations of blocks that won’t look just like every other site using the same default theme.

Norén would not confirm whether WordPress will be re-purposing Chaplin for Twenty Twenty or if he will be starting from scratch, as the team is not ready to make the announcement yet. WordPress 5.3 is expected November 12, so the timeline may be somewhat constrained for creating an entirely new theme, but it’s not entirely outside the range of possibility.

“This is probably (yes, most definitely) the best thing that’s going to happen for WP + Gutenberg adoption since the 5.0 release,” Matt Medeiros commented on the news about Norén designing Twenty Twenty. “His Chaplin theme has been a joy to use and provoked me to embrace using Gutenberg with his theme.

“Right now, Gutenberg feels like an early version of iOS stuffed into a Blackberry Bold when you don’t get the right theme. I hope he can give us something as enjoyable as Chaplin.”

With WordPress 5.3 beta 1 expected September 23, an announcement with more details regarding Twenty Twenty’s design and scope should be available soon.