10up launched ElasticPress.io this week, its new Elasticsearch SaaS product with plans starting at $299/month. Elasticsearch is an open source, distributed search engine that speeds up searching by using JSON documents to store data in indices. The indices store mapping fields to the corresponding documents and the engine searches the index instead of a site’s entire database.

Elasticsearch can perform near-real-time searches and is highly scalable, but the setup is technically demanding. It is used by many large companies, such as GitHub, Soundcloud, Etsy, Netflix, Cisco, and Samsung. It is also one of the most popular enterprise search engines for WordPress sites, as searching WordPress tables with thousands or even millions of records is simply not going to be fast.

The WordPress plugin directory has a dozen plugins for using and extending Elasticsearch but 10up’s ElasticPress is by far the most popular with more than a thousand installs. After supporting the plugin for several years, along with many enterprise clients using Elasticsearch, 10up decided to create a hosted service that integrates with ElasticPress.

“The reason we created this solution for our clients, and that we’re now making this public, is that we don’t think anyone has provided a super easy, end-to-end (plugin to hosted service) that offers all of the benefits of Elasticsearch and our ElasticPress plugin, while being completely agnostic to your site hosting,” 10up founder Jake Goldman said. 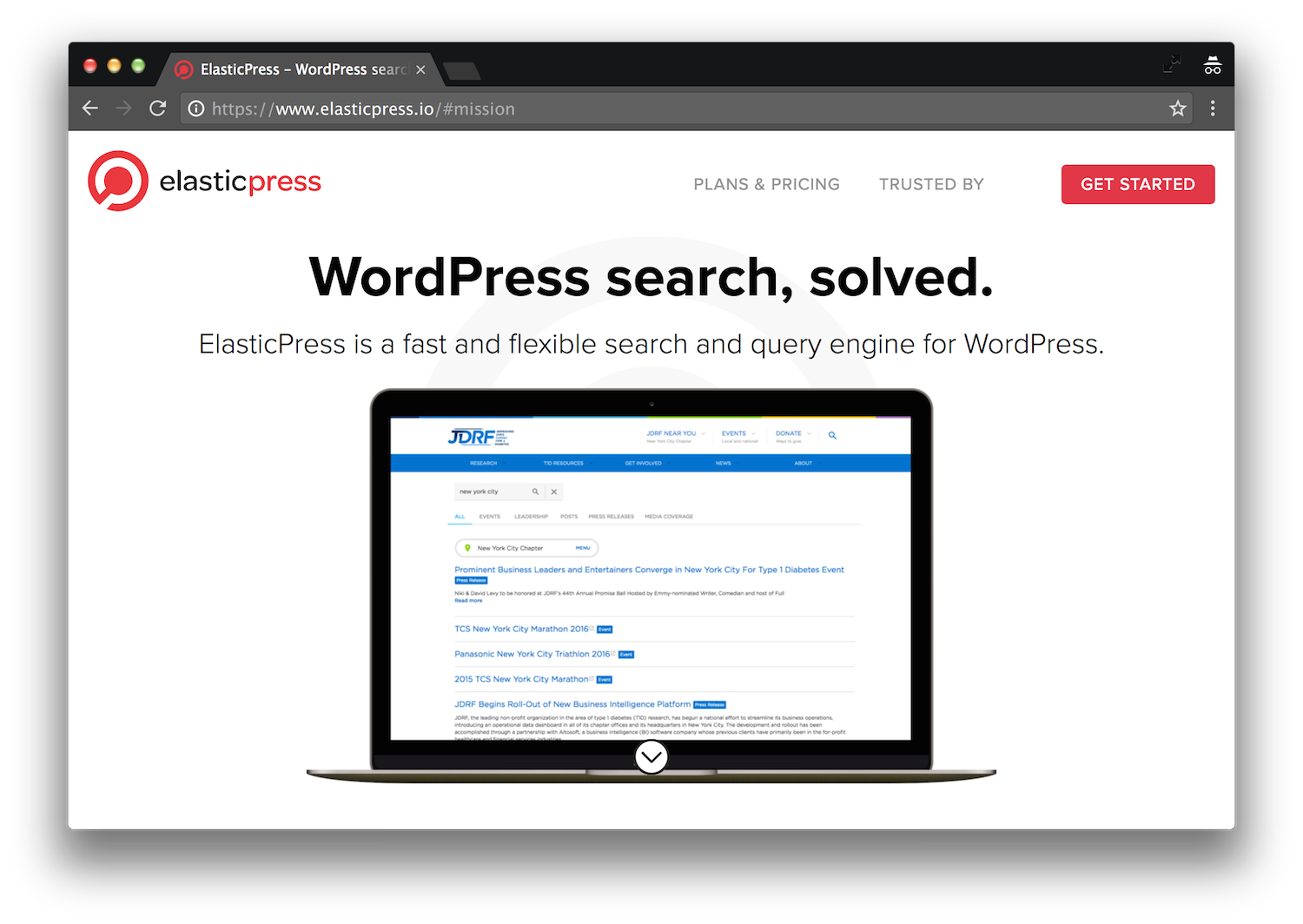 ElasticPress.io is an end-to-end solution that is specifically tailored for those using the ElasticPress plugin. This is one of the key differences between managing your own Elasticsearch infrastructure with a service like AWS. ElasticPress.io controls both the hosting and the plugin, allowing the service to optimize performance for both.

“There are a number of really neat use cases for ElasticPress on our roadmap that add either risk (security) or headaches (complicated setup and management procedures) if you can’t control both ends,” Goldman said. “For instance, there are optional Elasticsearch modules (just like there are optional Apache and Nginx modules) for features like indexing media that many hosted Elastic services don’t enable by default or support. We also want to be able to index and handle content that isn’t public, and many hosted Elastic services aren’t locked down / secured end-to-end with the website by default.”

How ElasticPress.io’s Pricing Compares to Competitors

The ElasticPress.io service is the first of its kind in the WordPress ecosystem. Most hosting companies do not have it built into their enterprise level plans. WordPress.com VIP is one of the few that offers Elasticsearch for sites on its plans which range from $5,000 – $25,000 per month. WP Engine has an Elasticsearch solution as part of its Labs program, which is based on a fork of ElasticPress. However, the solution has not yet been officially added to the company’s enterprise plans.

For the most part, developers who have to implement Elasticsearch for a WordPress site are faced with hosting their own instance and managing it themselves. This is the most cost effective option but comes with a great deal more responsibility.

“Elasticsearch is a quickly evolving platform, and they don’t exactly have the same commitment to infinite backwards compatibility that WordPress has these days,” Goldman said. “Major Elasticsearch upgrades can break old integrations. That means the site owner needs to either worry about automatic version upgrades breaking their site, or has to manage their upgrades carefully. By controlling the integration with Elastic on the website site and controlling the hosting, we can carefully handle version upgrades for customers while making sure nothing breaks.”

10up is aiming at the higher end of the market where customers are looking for convenience and access to the creators of ElasticPress for support. Goldman anticipates many of those customers will be similar to the product’s existing customers who simply need a robust keyword search or related content engine that will “just work.” ElasticPress.io is also targeting smaller and mid-tier businesses that are experiencing performance bottlenecks with WordPress’ native query engine.

“Those customers are typically relying on rather complicated faceting / filtering of content, the classic use-case being a WooCommerce store where customers are constantly filtering on a handful of unique (unique = hard to cache) meta data all the time,” Goldman said. “That’s where ElasticPress really shines: our native WooCommerce support and optimization take those very taxing queries and makes them lightning fast.”

As the service is fairly unique in the WordPress space, ElasticPress.io’s pricing has room to evolve as 10up learns from its customers. The plans currently range from $299 – $999 per month with increasing storage space and tiered support response times. Goldman said they haven’t ruled out other pricing points and may explore more pricing options in the future.